Quests are undertaken for the following:

Quest Rewards can vary depending on which quest you undergo. The rewards can be found by pressing the chest button found on the quest itself. Playing a quest at least once awards 5 Starlight stones.

Quests can be identified through the following:

There are two ways to access the Quests Page.

Upon opening the Quests Page, you are greeted with a screen similar to this: 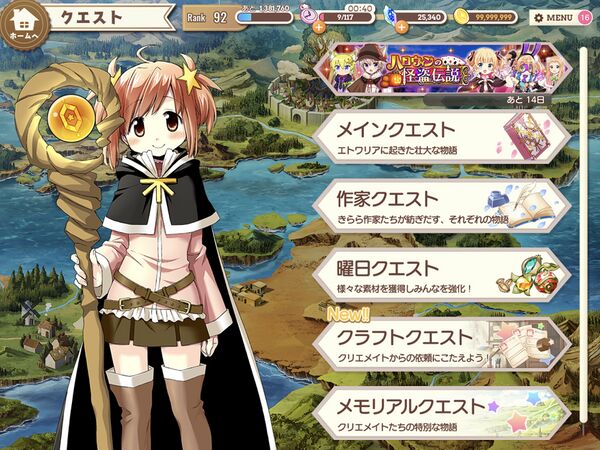 Starting from the top:

After selecting one of the listed quests above, you are greeted with a smaller set of quests, each grouped with its commonalities, whether related by quests or the rewards the quests give. Selecting the group of sub-questswould show you the official list of the quests. For quests that have battles, each listed event would have its requirement of stamina or keys. For quests that do not have battles, the game goes directly to the cutscene.

For more information regarding The Battle System as well as other mechanics, see Game Mechanics.

After the game finishes loading, you will be greeted with a screen similar to this. 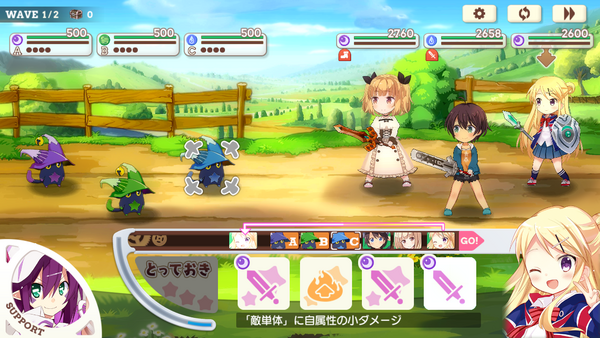 On the center left portion of the screen are the enemies. Each enemy will have a status bar on top of it. The status bar contains the following items:

The support you selected from the Support Selection Page can be found in the lower left of the screen, encased in a quarter circle with a waxing circle inside, with three round-cornered traingles pointing to the upper left, lower left, and lower right, with the word "Support" written in English.

The segment from the lower center up until the lower right portion of the screen contains the timeline, the "Last Resort" (とっておき) button and its gauge bar, the current active playable character and its available skills.

The currently active playable character is displayed as a portrait. Swiping the portrait to the right, reveals the current active Kirara Skills and the other characters selected from the Party Selection Screen. 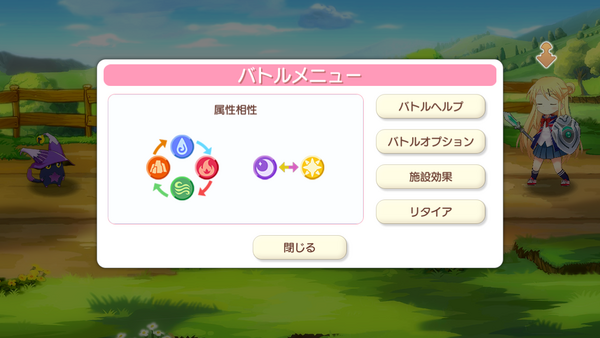 After finishing all the waves in the combat quest, the game is greeted with a quest success message, indicating that the quest been successfully cleared. The game shows the Battle Results screen (pictured below). 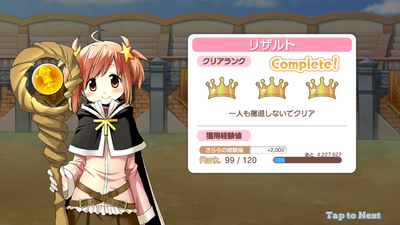 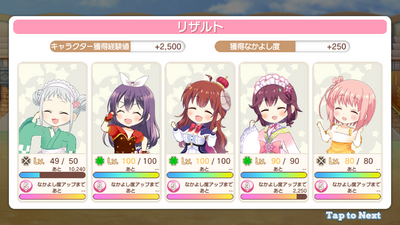 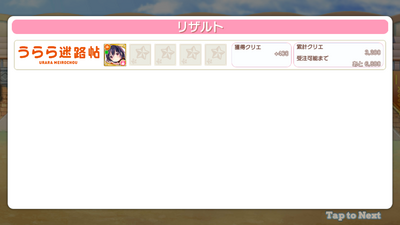 The Next screen shows the crea awarded by each character in clearing the quest. Each series that gained crea is listed in each sub-section. Each subsection contains the the series' title and the characters involved in that series. The total amount of crea gained is located after the characters. The total amount of crea gained for each series and the series' next target amount of crea is written at the right portion of the subsection. If the series' Crea requirement is fulfilled, a clear marker is indicated in the right portion for each series. For more infomation regarding Crea Craft, see Crea Craft. Tapping anywhere would lead to the next screen (pictured below). 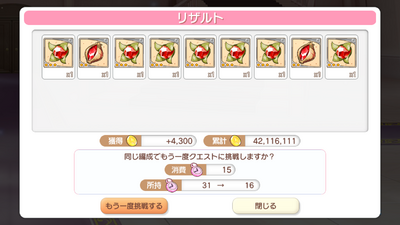 The final screen shows all of the items dropped by all enemies that dropped chests. Each item is represented by its icon and a number found on the lower right portion of the item. The number shows the amount of times each item is dropped. An extra number in yellow text can also be shown beside the regular number in white text, indicating that extra items are added for that item. The extra amount of items only shows during event quests, and are added for each character that can for each item. Below the item show the amount of coins gained for clearing the quest on the left, and the total amount of coins on the right.

Today is Thursday. The Daily Quests are:

The following table contains an overview of all daily quests, sorted by the weekday:

is not included in above table, as this banner is available everyday.

Thus, the Daily Quests can be grouped like this:

The following table lists all banners of this category, listed in the order the grindable seeds are sorted in the sortiment:

All these banners consist of 4 quests. The next table displays the cost, the drop items and all the other rewards for each of these quests.

Similar to Enhancement Seeds, you can also grind Evolution Gems of the current day's respective element on every day except on Fridays. These can be used to evolve your characters. The official name for this banner is "Evolution Gem Mining Grounds - _____" ( 進化球採掘場《__》) where ___ stands for the respective element.

The following table lists all banners of this category, listed in the order the grindable seeds are sorted in the sortiment:

Like the banners for the Enhancement Seeds, these banners also consist of 4 quests. The next table displays the cost, the drop items and all the other rewards for each of these quests.

As Friday doesn't correspond to an element of the game, the player could grind Coins on Fridays. But at some point, this banner for grinding Coins became also available on Mondays and Wednesdays:

As this banner is equivalent to the other Daily Grinding Quests, it also consists of 4 quests. The next table displays the cost, the rewarded coins as well as all the other rewards for each of these quests.

This is another banner that originally was only available on Fridays but at some point became available on other days as well. While the Coin Grinding Quests are still available on specific weekdays, this banner can be accessed all around the week.

Here, the player can grind Statues that are needed to evolve characters.

Similarly to the Coin Grinding Quests, this banner as well is equivalent to the other Daily Grinding Quests, so once also there is a total of 4 quests. The next table displays the cost, the drop items and all the other rewards for each of these quests.

Together with the implementation of Weapon Crests, which are an upgraded version of Weapon Symbols needed for enhancing weapons, this new type of Daily Quests got introduced as well. There is one banner for each of the 5 classes, so you can grind Symbols and Crests of the class you need. The official name for these banners is "_____ Training Grounds" ( _____修練場) where _____ stands for the respective class.

The following table lists all banners of this category, listed in the order the Symbols/Crests are sorted in the sortiment.:

Unlike all the other banners for Daily Quests, the banners of this category only consist of 2 quests. The next table displays the cost, the drop items and all the other rewards for both of these quests.

Notes regarding beating these quests:

- Unlike all other quests, the Crest Grinding Quests are special, as they require the player to form a party that consists of only one class. For example, to fight in the Warrior Training Grounds, You would need to form a party consisting solely of warriors. It's possible to enter the quest with any party, but if the enemies detect classes that are not the designated class, they will go berserk and unleash powerful attacks which are likely to wipe your party out.

- The developpers recommend the characters to be at level 80 or higher, as these quests are rather difficult to beat otherwise.

- The purpose of the Crest Grinding Quests is not only to grind Weapon Crests and Weapon Symbols of the specified class as drop items, but also to level the skills from characters of the specified class. This is why the enemies frequently charge your totteoki gauge, heal your characters or reduce the cooldown of your character's skills (so you can re-use your skills faster). Nevertheless, they also attack normally, which is why the recommended level is to be taken seriously.

- The element of the enemies appearing in the Crest Grinding Quests are random (soft-resetting the game to re-enter the quest won't change the enemies' elements though). So it's recommended to form a party of different elements as to prepare yourself to face many different situations. This also makes using auto-mode difficult, as the party would need to perform well against any element.

These quests are special quests that occurring for a specific amount of time. Event quests are used to introduce new characters or new series in the game, or show special interaction of character from different series, whether related to an annual celebration or not.

The current event is Hungry Christmas, which runs from 11-26 December.

This quest is a special combat quest only available during the weekends. The combat quest only contains one wave and it features a boss encountered during the previous events. A substantial increase in stats can be observed in the challenge quest. The boss AI might be altered as well.

The currently running challenge quest is:

Memorial Quests are unlocked once certain *5 characters are evolved. These quests tell their own unique tales, and all dialogues within these quests have full voice acting. Only characters with available translations are displayed here.

Retrieved from "https://kirarafantasia.miraheze.org/w/index.php?title=Quests&oldid=13156"
Cookies help us deliver our services. By using our services, you agree to our use of cookies.